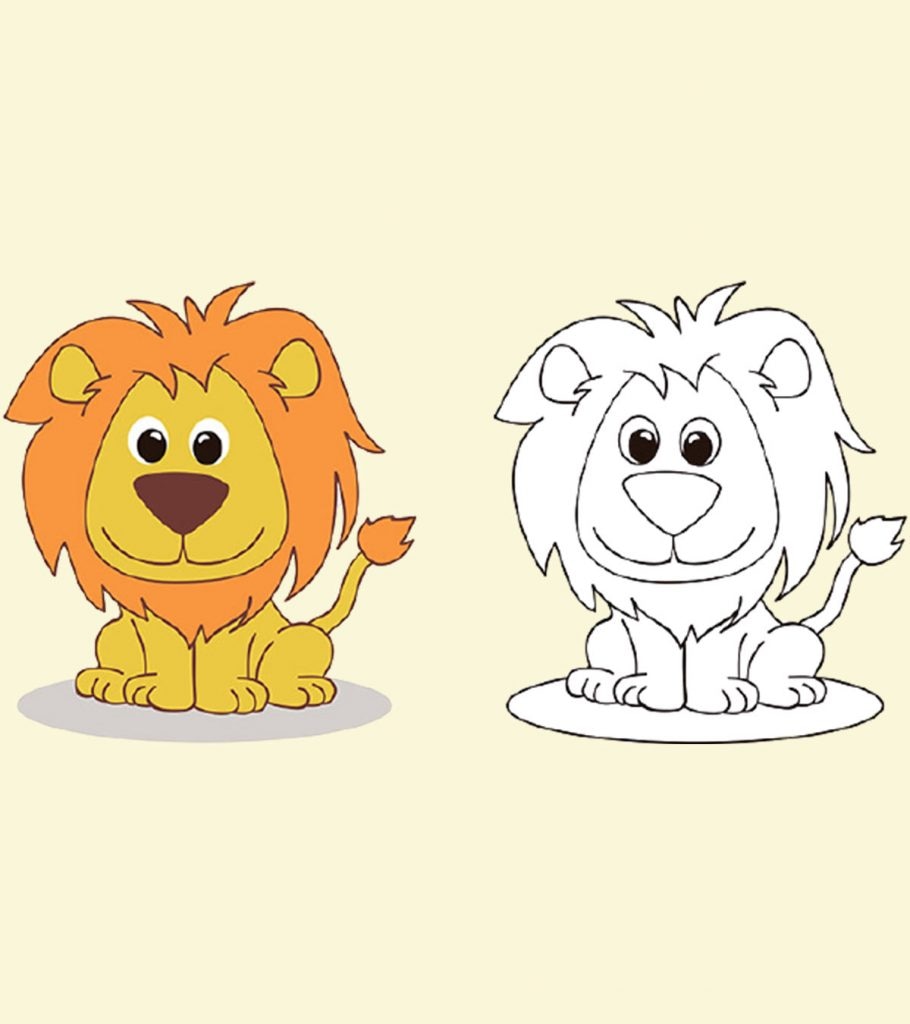 The lion is a mighty animal and is known as the king of the jungle. There are many  children’s stories that feature this magnificent beast. If your child has heard a story and bombards you with questions such as “What does a lion look like?” or “Does the lion have a tail?” It is best to introduce the lion to your child through drawing.

In this post, we give you step-by-step instructions on how to draw a lion in two different ways.

Things You Need To Draw A Lion

First, let’s look at the things you need to draw a lion.

How To Draw A Lion

Method 1: How To Draw A Lion In 13 Simple Steps

Using a compass, draw a circle with a circumference of five centimeters. Next, draw a smaller circle inside this circle such that the space between both the circles is one centimeter. The smaller circle makes the head of the lion.

Along the circumference of the outer circle, draw frills. Ensure that these frills are on the outer part of the circle as they form the lion’s mane. After you have drawn the frills, erase the outer circle.

Next, draw an oval-shaped circle, starting from one centimeter above the base of the inner circle. The oval circle is the lion’s body, so make sure it is in proportion with the head.

As shown in the image, draw two lines inside the oval circle such that they are just above the two smaller circles drawn in the previous step.

Now, erase the oval circle. Look at the image for further guidance.

Do you now see an outline of the lion’s body with a head and a body? Take a deep breath, as we are now about to draw the intricate parts of the lion.

Now it’s time to draw the lion’s legs and paws. Draw a “J” on the left and an “L” on the right, and draw two arcs to form the toes on both the feet, as shown in the image.

For the tail, draw two upward parallel lines on the right and draw a leaf-like structure at the end of these lines, as shown in pink.

Now, it is time to draw features such as eyes and a nose.

To draw the lion’s mouth, draw a curved line below the nose. Draw a semi-circle beneath this curved line to form the tongue of the lion. Draw two whiskers on both sides of the mouth.

Color the lion’s tongue in black and outline the rest of the body with the black sketch pen.

Color the lion’s body and face in yellow, and the mane and end part of the tail in brown.

Your child will be delighted to see the lion come into shape in front of their eyes. Encourage them to practice as many times as they want. Hang their masterpiece in their room or stick them to the fridge to display their achievement to your family and friends.

Method 2: How To Draw A Lion In 10 Simple Steps

Here is another easy method to draw a lion.

To begin with, draw a “U” with a slightly wide bottom on the paper.

Connect the ends of the “U” with a wavy line. Also, draw an inverted triangle in the middle of the “U” shape – this will form the lion’s nose.

Next, draw two curved lines on the forehead, starting from the sides of the nose, as shown in the figure. Next, for the lion’s mouth, draw a wide, curvy “W” below the nose, with the middle line touching the nose.

Put three dots on both sides of the mouth. For the lion’s eyes, draw two circles below the curved lines above the nose. Draw two small circles inside the eyes. Color the entire eyes apart from the smaller circles in black.

Did you know that a full and dark mane is a sign of a healthy lion? Draw a chain of semi-circles around the head to give your lion a mane.

Draw a “J” on the left and an “L” on the right, inside the body. These will form the legs of the lion. Next, draw two arcs to create the toes, as shown in the image.

Give the lion its back legs by drawing an arc on either side of the lion’s body, as shown in the figure.

Extend the back legs by drawing the toes, and complete the drawing by adding a tail, as shown in the figure.

Outline your drawing with a black sketch pen. Color the lion’s mane and end of the tail in brown; the body, the face, and the legs in yellow; and the inner ears and nose in pink.

And that is how you draw a lion in simple steps. Drawing helps children develop fine motor skills and also improves concentration. These easy-to-draw methods would help them create masterpieces that you can proudly show off to your friends and family.

Following Instructions | How to get kids to listen without yelling
100 Tibetan And Sherpa Names For Baby Girls And Boys
A Day In The Life, Unschooling, Playdate, Swimming
Waste material reuse idea | Best out of waste | DIY arts and crafts | recycling spoon craft
DIY Face Mask 😷 NO SEW in MINUTES with Upcycled T-shirt